The 25th of March is an important date for Catholics around the world as it celebrates the Annunciation of the Virgin Mary, the incarnation of Christ who is born nine months later on 25th December. But, what most people don’t know about, is that until 1582, throughout the medieval and Renaissance period in all of Europe, this was also the first day of the year. In Florence however, the 25th of March continued to be the first day of the year until 1750.

In 1582 Pope Gregory XIII changed the calendar and made long overdue and much needed major reforms on the one mapped out by the ancient Romans and, indeed, today we follow the Gregorian calendar. Until 1582 all of Europe however followed the Julian calendar which Julius Caesar had implemented from 45BC after changing the time calculations to follow the Egyptian solar based calendar rather than the lunar based one they had been using for centuries.

Due to slight imperfections by the Ancients in the calculation, by the time we arrive at 1582, the days and the seasons no longer corresponded. Pope Gregory XIII ordered the major astronomers, scientists and mathematicians of the day to readjust the calculation of the year. In order to create order in chaos, it was necessary that the 4th October be followed by the 15th October, also making the first day of the year the 1st January.

Not everybody followed this new reform immediately. In fact, it took until the 1900’s to get everybody on the same page. Immediately after the papal bull was signed by the pope in 1582 the Protestants viewed it with suspicion and the poor viewed it as a cunning ruse on the part of the landowners to squeeze more rent money from them. In Florence the change of new year happened only in 1750 under the Grand Duke of Tuscany Francis Stefan (a plaque on the right hand wall of the Loggia dei Lanzi in the piazza Signoria reminds us of this). England followed soon after in 1752, the Bolsheviks in 1918 after the October revolution and Greece only in 1923! 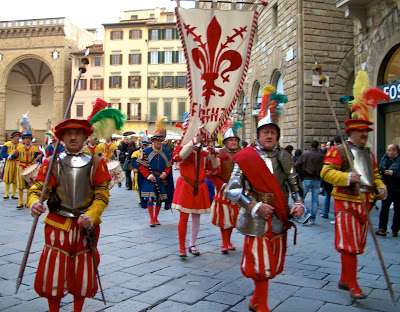 Every year Florence continues to celebrate the traditional new year with a historical procession in costume in the afternoon which snakes through the centre finishing at the Santissima Annunziata church. Here the citizens of Florence pay homage to one of the city’s most venerated images of the Virgin Mary shown receiving the Holy Spirit along with the Archangel Gabriel.

This painting of the Annunciation inside the Basilica dates to 1252 and it has been greatly venerated since it’s creation. The Annunciation fresco was commissioned to a painter called Bartolomeo who, after completing the archangel Gabriel, was so overwhelmed by the task of having to paint the beloved Holy Mary, decided to have a little nap in order to increase his energy levels for the impending job. When he awoke however, much to his astonishment, the fresco was finished!
The news of this miracle spread like wildfire and since then it has been one of the most important spiritual images of the city and a major pilgrim site for Florentines.
The Basilica of Santissima Annunziata is, in any case, a church partial to the Virgin as it is of the Florentine order, the Servites – servants of the Madonna (the street that leads to the Basilica from the cathedral is called via dei Servi after them). This uniquely local order was created in 1246 after the Virgin appeared to seven Florentine noblemen who, in consequence, founded an order dedicated to her.
So tonight, go out for a prosecco to welcome in the new year Florentine style, after having passed by the miraculously angel finished Virgin housed in her beautiful silver coated chapel inside the Basilica Santissima Annunziata!   Cheers and happy historical new year!