The medieval Palazzo Vecchio is a gem of a museum. There are so many interesting nooks and crannies and it spans the great Florentine period, from the republic in the medieval period to the dukedom from the 16th century onwards.

La Sala delle Carte Geographiche (the room of the geographic maps) is truly a gem! It was created by Cosimo I, the second duke of Florence in the second half of the 1500s. Moving into the government building in 1540, he converted it into his ducal palace, and created the map room to represent the known world at the time, both terrestrial and celestrial.
Some of the most talented cartographers and aritisans on the Italian peninsula worked on decorating the space. And some of the most precious objects in the Medicean collection were kept in huge walnut wood cupboards that he commissioned from Dionigi di Matteo Nigetti – objects such as tapestries, scientific instruments (often called mathematical jewels due to their exquisite goldsmithery), bronze stuettes and silver. These objects were all listed in ledgers kept by the duke’s guardaroba staff (another name of the room, which means, literally, cloakroom) and tracked when taken out of the room.
The room would have been truly spectacular had all the planned projects been carried through. Above the cupboards, there were to have been a series of marble busts of ancient emperors and on the wall behind, a series of paintings, now in the Uffizi gallery corridor, of illustrious people from antiquity to the late 15th century (called the Giovian series).
Below the maps there were to have been paintings of flora and fauna to match the geographical area depicted above. The wooden ceiling, divided into twelve wooden coffers, was to have been decorated with the forty-eight constellations. 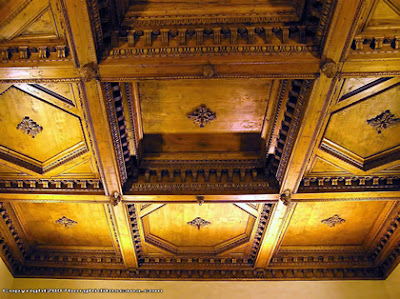 It was originally planned that two huge globes, celestial and terrestrial, be stored in the ceiling above and connected to a mechanical device. When two of the coffered areas slid open, the globes would be lowered into the room upon demand. Unfortunately, only the terrestrial globe was ever made and it now stands in the middle of the room, finished in 1567 by Matteo Neroni. It was the largest globe ever made at the time.
A truly magnificent armillary sphere showing the planets and fixed stars, made by Antonio Santucci delle Pomarance (1588-93), was also in the room . This is now deservedly displayed in its own room in the Galileo museum (Science museum) and is a wonderful combination of technical knowledge and artistic ability. Finally, the famous astronomical clock of the planets, from 1484 by Lorenzo della Volpaia, was also here next to the armillery sphere, but this, tragically, is now lost.
This room is unfortunately often overlooked, being at the end of the museum.  However, it is yet another insight into the extraordinary dedication to knowledge and finery that the Medici family were renowned for on the European continent.